A Tribute to my Father John L. Wright

Saturday, April 28th, we lost our beloved father to a battle with Dementia. A horrible disease that I wouldn't wish on my worst enemy. I was so grateful though that he didn't suffer in the end and the Lord took him in his sleep.

On Friday, the day before, the nurses at Garden Terrace nursing home, reported to us that he was organizing their carts and doing wheelies on his wheel chair, the usual, but on Saturday he fell into a sleep and died Saturday evening. It is what we all prayed for, that he would be taken quickly. It was bad enough that such a wonderful man had to live through such a debilitating and awful disease.

He was born on July 7th 1930, during the start of the great depression. He would tell us stories of that time and I wish I would have been smart enough to write them down because the stories were wonderful! He grew up in Independence, Missouri, and his father owned a bar and grill. The family had a secret chili recipe that has been handed down through the generations and we had always enjoyed it when Dad would make up a big pot. Dad would tell us about the characters that would frequent the bar and how at the age of twelve, he worked there washing dishes. He would have me on the floor laughing when he would describe some of these people!

During those times, Dad told me they had no paper money, only coin and for a quarter he could go to the movies, buy a coca-cola and a snack. He also worked as a soda-jerk and he delivered ice to local businesses in the area. He swears that's why he ended up having to have his hips replaced. It was because the ice used to run down his back when he would carry it in. That caused his arthritis. 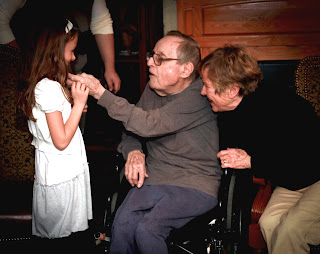 When he became a young adult, he joined the service. He was in the Coast Guard during Korea and was stationed in Hawaii for three years, transporting goods to the ships that were heading to the waters surrounding the war zoned areas. After his military service, he decided to travel and raise money for college. He worked in a mine in Idaho, sold women's clothing on the road and then finally got a job in a department store. He went to college and received a business degree.

Eventually he moved to Lexington, Kentucky and worked for McAlpins, which was a sister store to Joslins dept. store. He worked in men's suits. He met his best friend there, Ted Green, who was an ex-pro football player. Ted took him to games and introduced him to a lot of the greats, the players and coaches boys would dream about meeting. He also had two of his nephews come live with him in Lexington for a short time, Mike and Gary. They had lost their father and needed support. 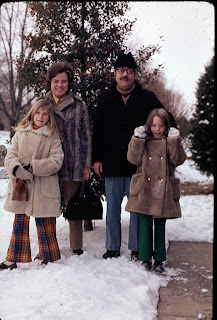 He met my mother through Ted and eventually they married on Oct.31st 1969 in my grandfather's office at the church. Both of my grandfather's were ministers. Three years later, he adopted my sister and I, and we took his name. He was an awesome dad! Always full of energy, humor, and love. He became my best friend and was always fair, but not very patient. I was a pain in the arse though!!

I wanted to share with you a couple of the funny stories I can remember about my dad. First, I remember when I was 15 my uncle Bill had died and we needed to go to Kansas City. My father and I drove together to be there for Bill's family and on the way my father was smoking like a freight train. Yes, he smoked, but quit when I was 19 yrs old. He said, once cigarettes became a dollar a pack, he was quitting, and he did. Well, I was smoking by then and I was jonesing for a smoke, watching him. Finally, I got up the nerve to ask if I could have one and he looked at me with almost if death could kill eyes, and then turned back to the road and said, "Well, I guess if you have too, but we will discuss this when we get home." So, he and I together smoked our brains out there and back. The first time he asked me to sit down and smoke in front of him, he told me to light up and said, "Do you realize how stupid you look?" And I answered, "What, you look beautiful when you smoke?" That was the end of that. Afterwards I smoked openly. I have to say, he was fair.

Another funny story was when my sister met her now husband at the ripe old age of 17 yrs old. She had known Scotte in Jr. High, but he didn't notice her until she bloomed! They finally met at a friend's record store and he offered to give her a ride home on his motorcycle. He had hair longer than my sister, his bass guitar strapped to the sissy bar and he pulled up, dropped her off and Dad was standing at the door. His look was priceless--every father's dream man for his daughter. Scotte immediately walked over to my dad and offered his hand and called him Mr. Wright. My Dad hesitantly shook it and Scotte asked to date my sister. He was shocked and probably instantly numb but nodded and agreed. Well, long story short, they have been married for 29yrs and still going strong!

He used to grab our hands and we would dance in the kitchen, or we all became clowns (literally) and worked Jerry Lewis Telethons and at the Yum Yum Tree standing out front making animal balloons. He taught my sister how to Jitterbug but had to keep reminding her not to lead. He would make silly faces all the time and he loved impersonations like Groucho Marx and Red Skelton, Humpfrey Bogart and of course, Woody Woodpecker. He was actually still doing this up until the day before he died.

After we grew up, and I use that term loosely, he loved to come over and visit and tell stories about his childhood and have me peeing my pants in laughter! He also loved his grand kids very much! He took the kids on trips or to ball games, or Eliches. We would go over and he would take us all swimming and then afterwards he would grill us up some delicious steaks or ribs. Family was everything to him. He cherished his time with all of us and was very proud and supportive.

My dad lost his mother when he was twelve, and the family was split up between grandparents, and aunts and uncles and his father raised my dad and his oldest brother, Bill. There were 7 kids, 5 boys and 2 girls. But even with the split up, the family remained close. As luck would have it, they all remained in the same city. Those were hard times, but as my father used to say, the best of times because they all came together and helped each other. He used to tell me a story about a man that used to come to the back door of  his grandmother's kitchen and she would give him a sandwich every day. 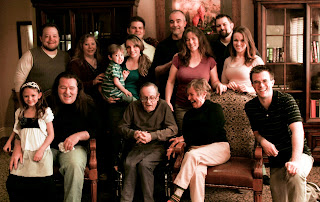 I am so grateful to have had him in my life. To have become one of his daughters and to have him as the grandfather to my children, and great grandfather to my grandchildren.. He touched a lot of peoples lives, and was a person that you could never forget. I wanted to share with you my good fortune in having such a wonderful father and friend and I will miss him every day of my life.

Thank you for listening and being there for me. I love you Dad!!!