Please welcome my new guest, Shah Husain, a writer of myth’s, legends, and fun stories from India, Africa, and other Ancient worlds. Her books are quite a few to list, but they are full of insight, intrigue, and information about a time in our history almost all but forgotten in this modern age. And, since my series touches on the Genie, or Djinni lore, I was fascinated about her work. I first became attracted to her books when I saw the one about the history of the Goddess—the oldest known religion to the human race. It is 25,000 years old. Right now, Shah is not promoting a new book, but instead is working on a new pilot series in the UK where she lives, one that I would love to know more about. I hope that all of you enjoy the interview and don’t forget to leave her questions and comments. 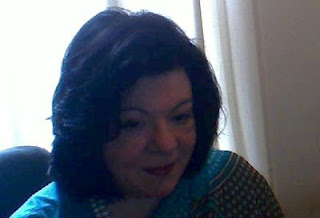 Thank you Shah for letting me interview you for my blog. I am looking forward to getting to know you better.
Tell us a little about yourself and back ground: Well, thank you very much for inviting me on to your site, Lisa.  I’m pleased to be here.  My first memories are of London, UK,  where my father was completing his studies to practice at the Bar.  Then we returned to Pakistan.  It was a very educated, literary household, so we breathed books, stories, writing and reading, along with the oxygen.  It was an idyllic childhood in many ways.  We were surrounded with gardens, greenery, hills and an amazing verve and vigour.  Pakistan was not even 10 years old when we returned to live there.  It was country full of hope – everyone had a purpose and a place and it was a brave new world, specially for women.  Who would have thought we’d look ahead 30 years to such catastrophe.  But as I grew up the sheer vitality and optimism of people around infected me.  My mother worked hard to rehabilitate refugees and her general attitude was, yes, some things are not so good YET, but we’ll fix’em.  That attitude didn’t really allow the self-doubt writers feel -   I’m afraid I’m going to repeat that writers’ cliché about writing since I learned to hold a pencil. I never doubted even at 5 that one day my scribbling would be in a story book. I started freelancing, interviewing and writing short stories for magazines when I was in my teens – wrote for children’s pages when I was much younger.  I did radio programmes from interviewing to weekly diaries– and then finally, started to write books.  My first book was published in the early 80s.  I write for children and for adults.  Fiction is my passion though I’ve written a fair amount of non-fiction too and I enjoy writing screenplays.
I would love to know about your pilot series, what’s that about?:
These are two TV series: one’s an adapatation from ancient Indian myth and the other is a contemporary story centering on the paranormal.  A high profile director approached me for a collaboration about the first and as we worked on that I mentioned the second idea and she was very taken with that too, so she took my proposal to the network’s drama department and they went crazy for it. Both proposals are in the early stages of development.  We have a fantastic broadcaster backing them.  But these things take time and there’s many a slip in the world of film and TV – I’ve been around long enough to know these things can disappear into thin air at any stage.  I’m still confident about these, though. So far everything seems to be progressing well. There are actually signatures on dotted lines and all submissions have been approved to date.
Your writing takes us into a time long since passed, what has been your motivation?:

Indeed.  Many of my books are set in the land of never-never and magical, mythical worlds that still survive in our unconscious minds.  I grew up in Pakistan and India listening to stories.  As children we were rarely told off or given instructions without a story to demonstrate the point.  Some of my mother’s relatives in India lived in a deliberately un-modernised way in places where TV did not penetrate until the 1970s.  This meant my siblings and cousins and I spent a lot of time amusing ourselves in inventive ways.  One of my favourite pastimes was exploring wooded areas, orchards, gardens and scrub and fantasizing about magical worlds within them.  One of my favourite pastimes was to listen to stories wherever I could find them.  Ghosts, jinns, witches, fairies and demonic beings.  I read the stories too, of course, voraciously: all the tomes of European, English and American fairytales I could find as well as Russian, Chinese and Japanese and Middle Eastern ones.  I found out many things that influenced my later writing choices.  Firstly, I realized I liked listening to stories even more than reading them. Secondly, that most myths and fairytales and legends fall into certain patterns and contain similar motifs and themes no matter where in the world they come from.  So I chose to retell fairytales in a colloquial manner and all my story collections for adults (Virago Press) tend to be around a single theme – eg. Witches.  Traditional tales demonstrate a universal tendency, a oneness about humanity, which greatly appeals to me and which is very unifying.  According to Jung, these stories come from an unconscious reservoir of story and we all share it.  That was why I was thrilled when my recent children’s book about a popular character Mulla Nasruddin was selected as one of only 9 recommended reads by Chautauquan Institution for its Young Readers Programme.  (link to interview in Chautauquan Daily
…. interview
Do you have any ideas for a new book in your future?:
I am always exploding with ideas, Lisa.  It sounds ungrateful but I kind of wish they’d pause a while and allow me to write what’s already churning around in my head.  I’ve got a novel coming out next year, set against sectarian violence in India and am two-thirds of the way through a modern reinterpretation of an ancient Indian myth. It looks at Multiple Personality Syndrome.  I’m really enjoying it.
I am writing a fantasy fiction series and based my world on the Djinn. Not the Djinn in a bottle, but a race of beings in another dimension. I named the world Djenrye and the people are the Djen, (different spelling) but I wanted them to be a people, not a typical trickster with wishes. What kind of lore can you tell us about the Djinn?:
You’re on to something there, Lisa.  In Middle Eastern tradition Jinns there are races of Jinns distributed into tribes much like humans, with their own motivations and activities. Interestingly, I’ve been thinking about Jinns recently in connection with an episode for my TV project but I have been fascinated with them since I can remember.  I grew up in a world where people freely believe in Jinns and speak as casually about them as people in the west may speak about astrology or psychics.  They take them for granted and take appropriate precautions as a matter of course. When I visit Bangladesh people regularly refer to some precious object being found through the aid of a ‘controller’ of Jinns, in India they speak of Jinns inhabiting mosques and wild places.  In Pakistan, too.  Apparently they love sweet-meats, shift shape and sometimes live in mosques or in trees, love flowers fall in love with human women, specially those with long hair and beautiful voices.  When they do, they become very possessive and prevent them marrying or having romantic relationships even if this means making them mentally or physically ill.  They can be cast out, of course – but it’s hard because they are apparently religious beings and so prayer is not an antidote.  Of course the Arabian Nights stories – the real ones, not the sanitized western versions for kids – reveal much of this lore.  I had a great uncle who spoke of seeing them in the late 19th/early 20th century when he travelled far and wide in India as a District superintendent.  There are loads of tales about them transforming into snakes - in oral tales and the Nights, so in a country like India at that time, where there were lots of snakes, there was always the worry that one of them might be a Jinn!!  The Quran describes them as beings of ‘smokeless fire’. It tells of many races of Jinns, good and bad, and names some of their significant leaders.  They are not immortal but they seem to be somewhat invincible.  I remember fairytales in which they would hide their heart inside a bee, inside a fruit, inside a parrot.
I really look forward to reading your book, Lisa.  Best of luck with its progress.

Thank you so much for answering my questions. I would love to sit with you and talk about these stories. First I love history, and second, I love fables. If you would like, please leave us with your thoughts and anything you wish to promote about your pilot, or your books. Also, don’t forget to leave your links so everyone can check out your work. Thanks again Shah, you’ve been wonderful and I appreciate you and your books!

You can find Shah's works on Amazon, Goodreads, and Barnes and Noble sites, or go to her website-http://www.Shahrukhhusain.com You can also reach her on FB and Twitter.

Thanks for joining in my wonderful blog followers and leave Shah a comment or question. she will be checking in periodically to answer. Until Thursday, have a great week!